First launched in 1972, the Nautor’s Swan 65 is a classic sailing yacht and was the world’s largest GRP yacht. Designed to be a fast, strong and luxurious ocean racing yacht, the Swan 65 soon proved it’s pedigree by winning the first Whitbread around the world yacht race (now known as the Volvo Ocean race).

As a child I remember following the first Whitbread around the world race - and looking at brochures of the (at the time) magnificent classic Swan 65 that I was sure I would never be able to afford. Some 40 years later, Eve (then called "Kenta" and Italian registered) sailed into Sydney harbour as part of an around-the-world trip and her Italian owner decided to sell her.  I was in the market for a 50 ft around the world yacht at the time and, as I walked up to have a look I told myself "it's too big, don't buy it, just have a look to satisfy those childhood memories".  But I just couldn't help myself - I made an offer about an hour (and two beers) later.

Having spent the last 4 years sailing around Australia and completing 3 Sydney-Hobart races and a Sydney-Noumea race (which we won!) we are about to fulfill another childhood dream and spend the next 5 years sailing around the world.  Cape horn, the northwest passage, tropical cruising, and a heap of regattas and ocean races lie ahead.  Not only is Eve the perfect boat for this adventure but I've been lucky enough to find the perfect crew in Ben and Meg.  I can't wait!  And Eve is big enough to share this experience - so I'm looking forward to new people joining us for various parts of the adventure.

Eve is equipped of three double cabins (each with en-suite), a crew cabin for a total of 9 berths with full sprung mattresses. Her huge main saloon and her large galley will give you all the comfort you need to make your experience aboard unforgettable.

Varnished teak throughout exudes classic charm but she also has a full complement of modern conveniences including deep freezer, air-conditioning, wifi, TV and 6-speaker stereo. 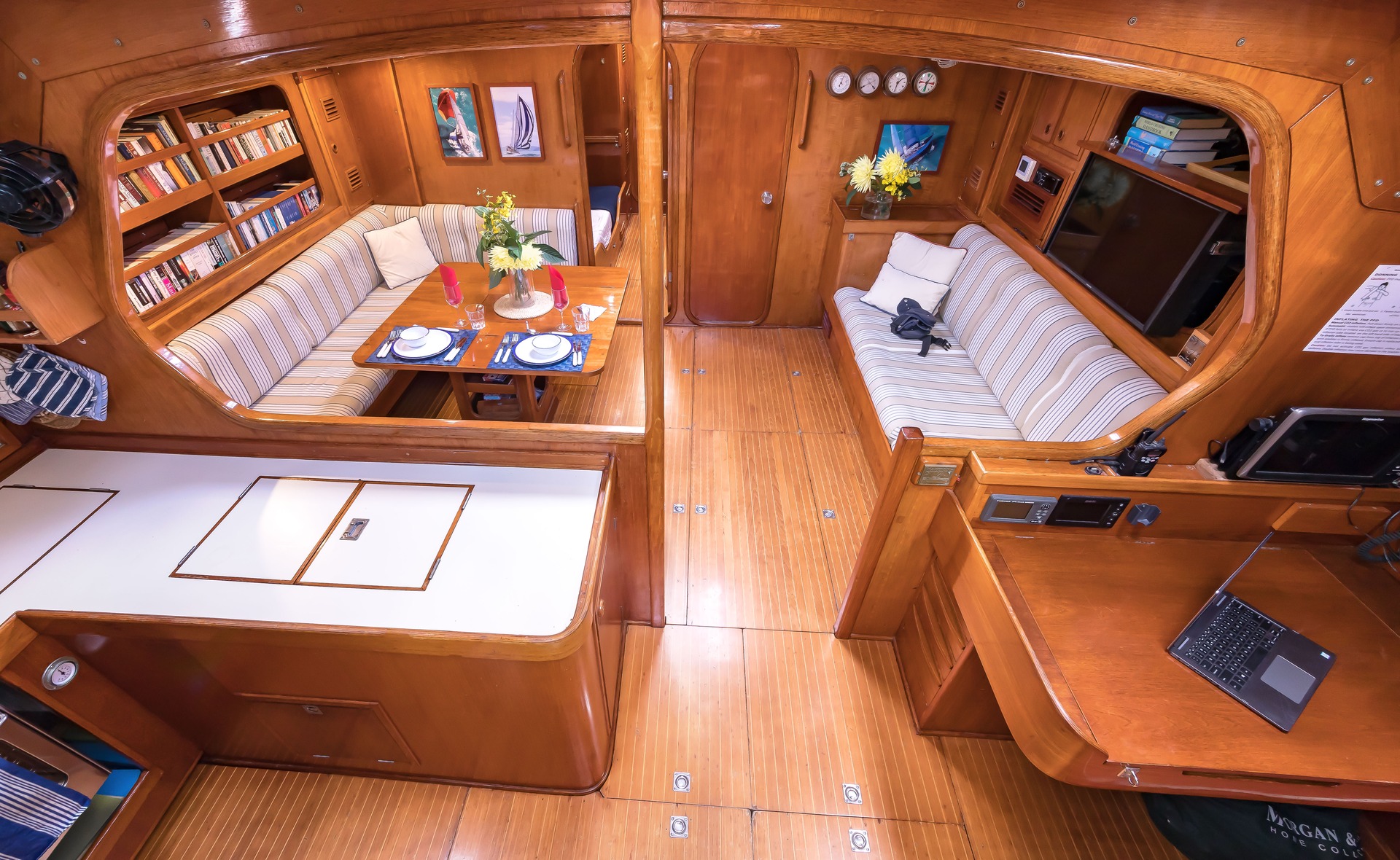 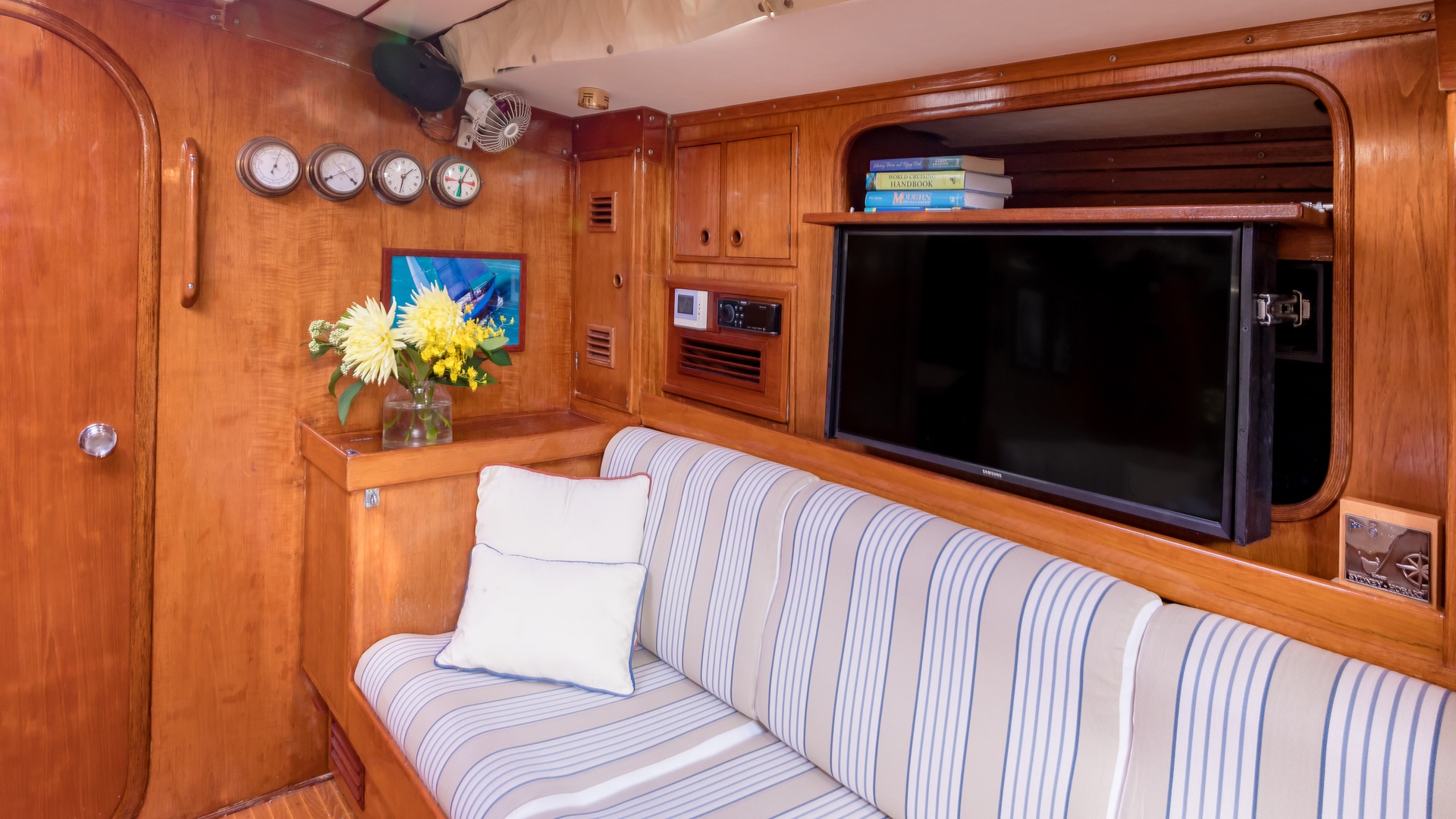 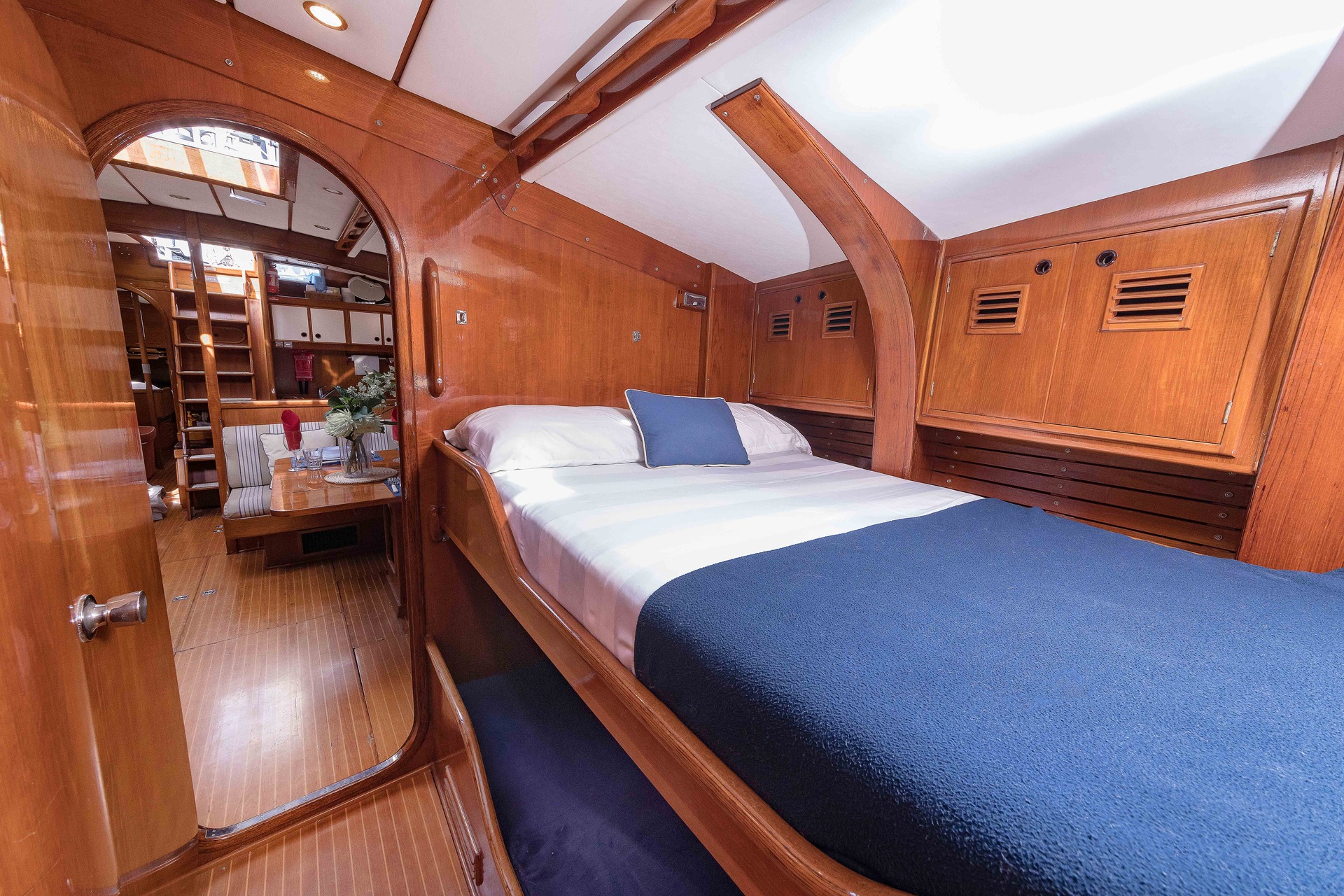 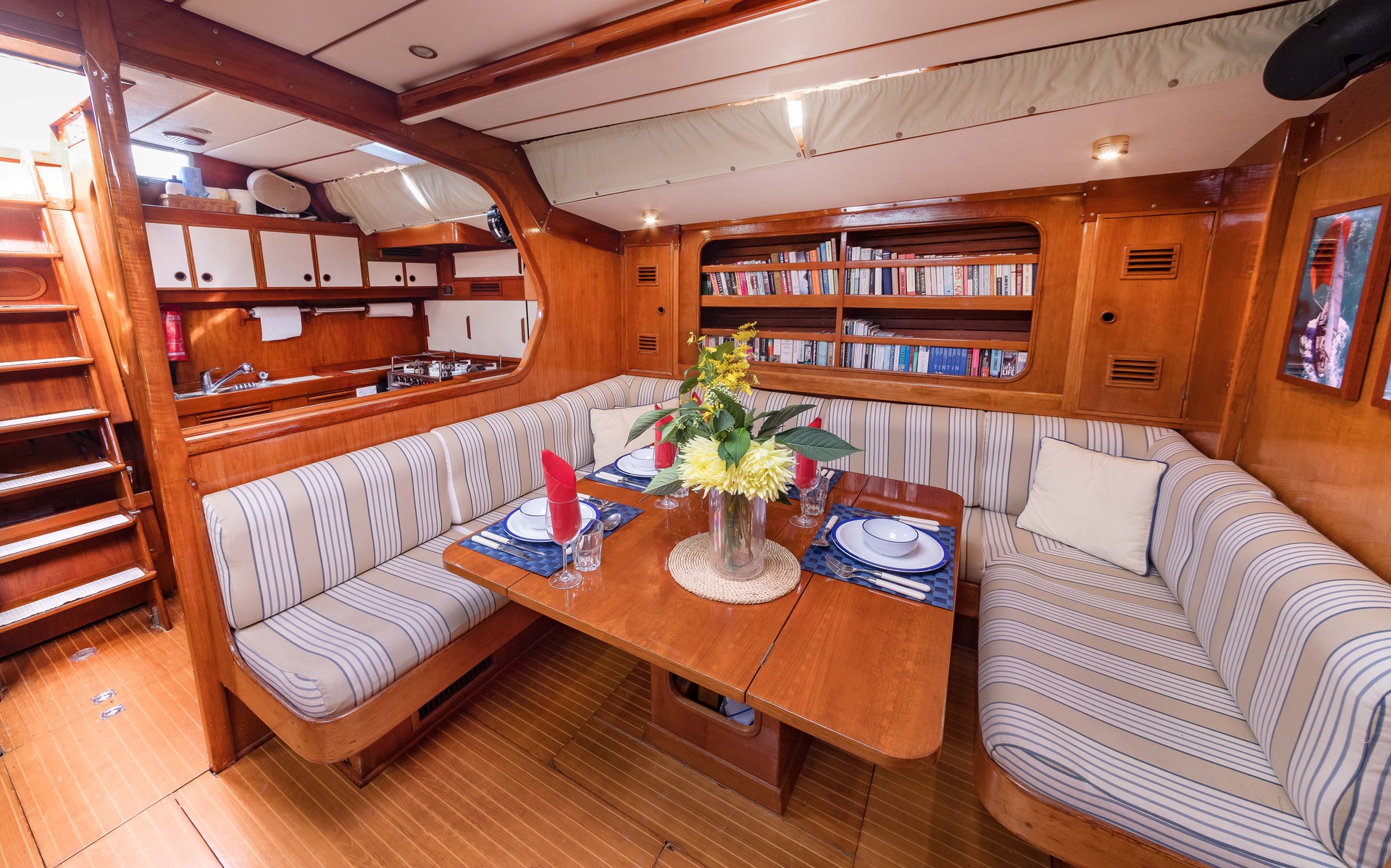 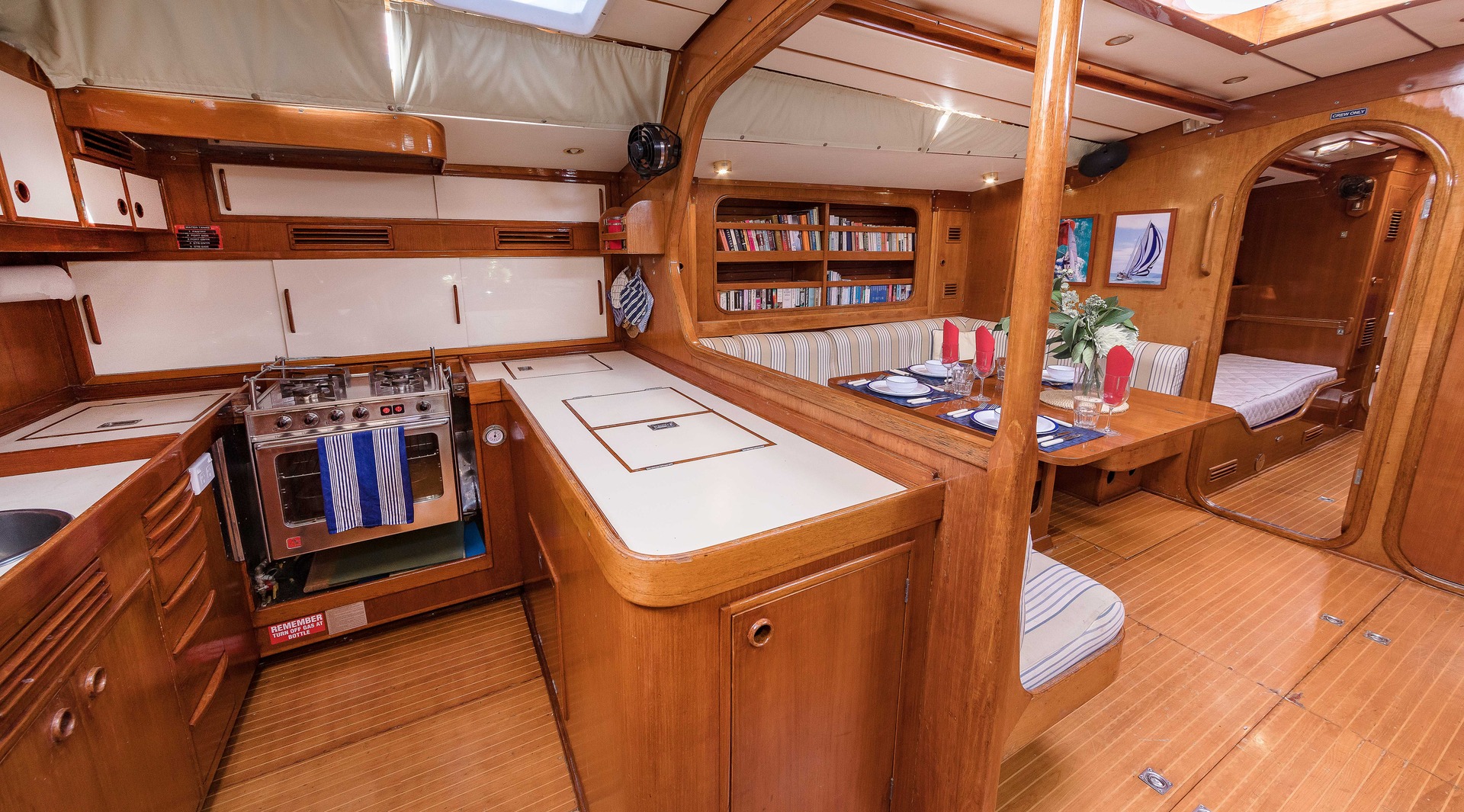 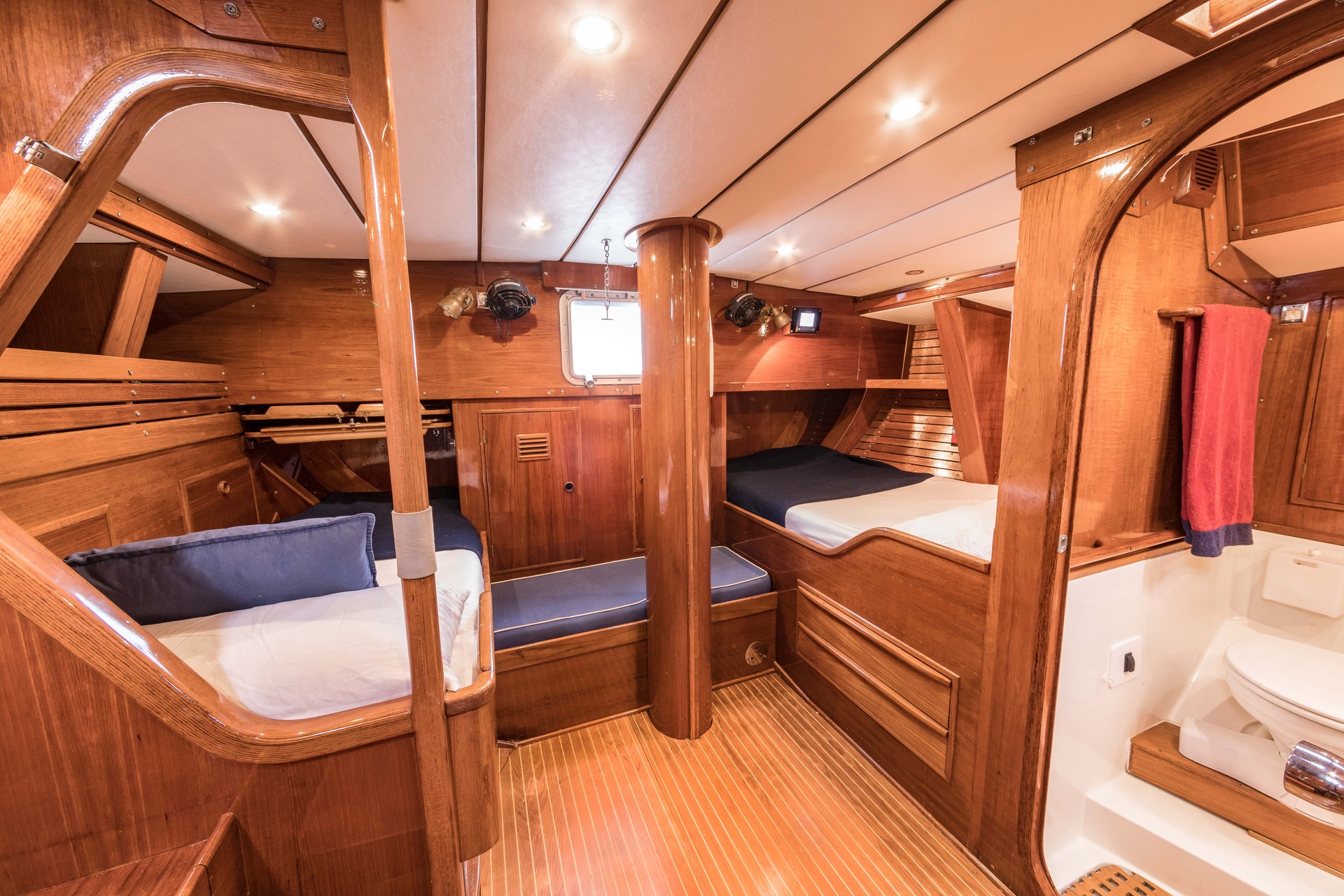 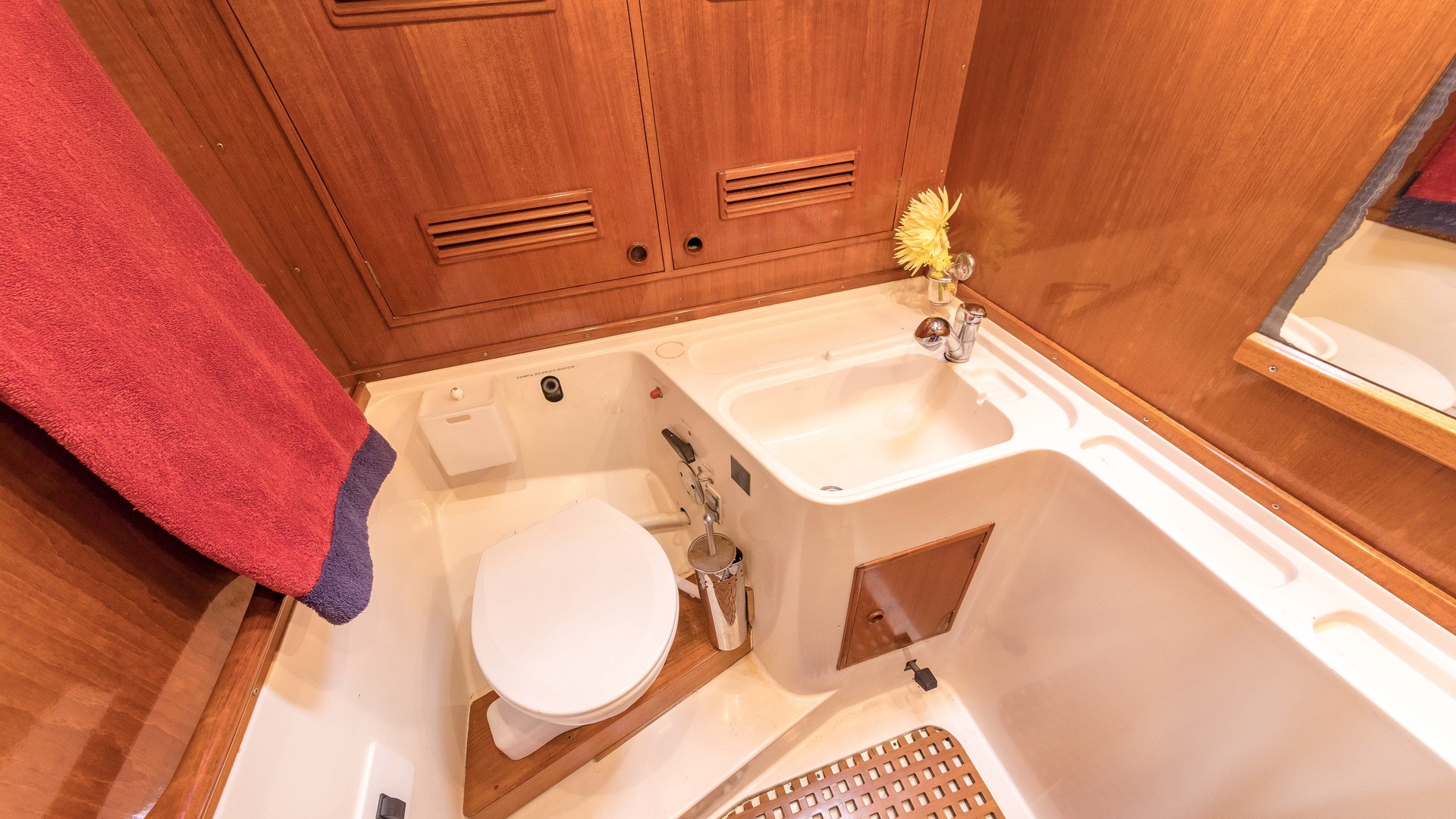 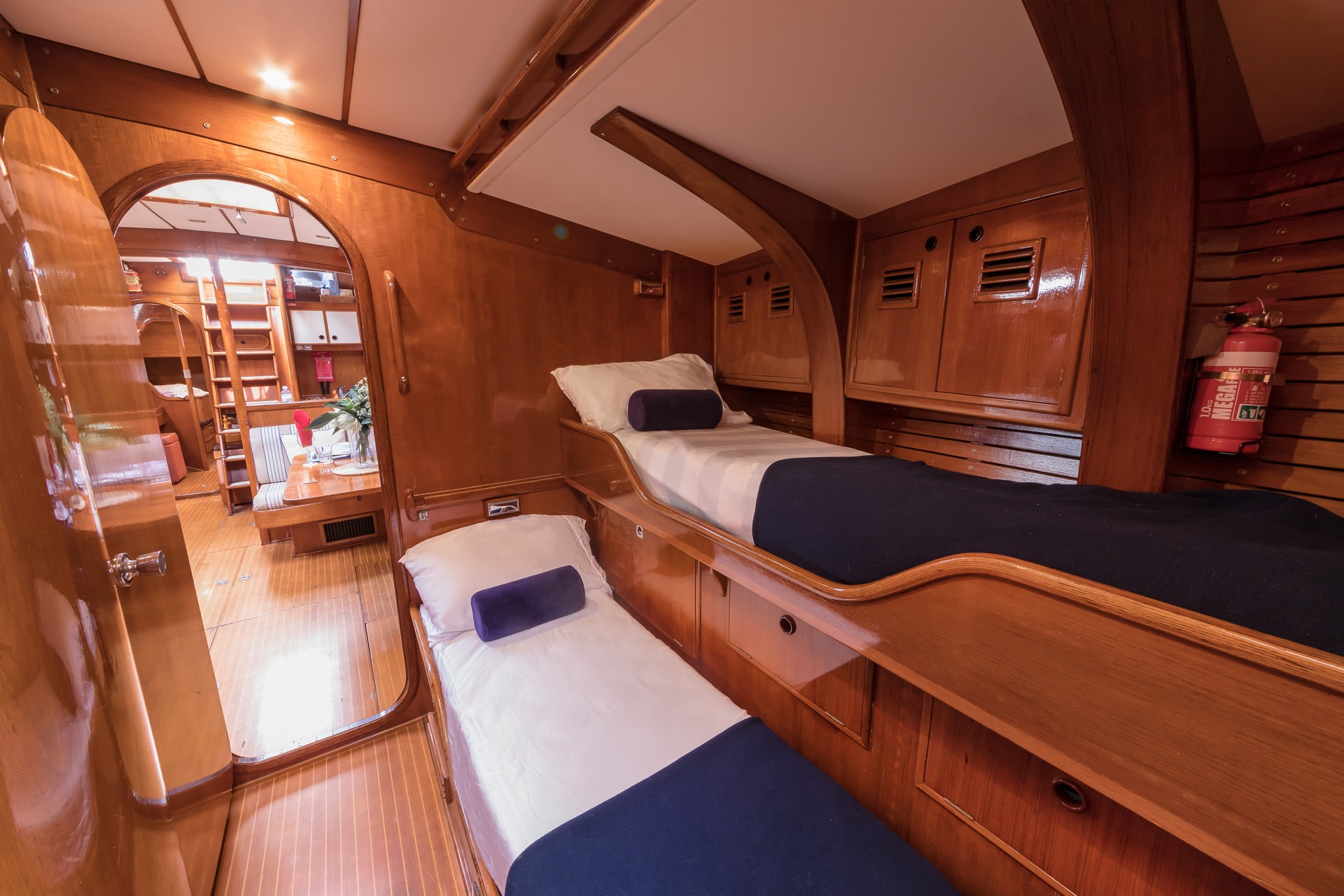 Outdoors, she has a powerful twin mast sail plan and plenty of toys for a great regatta race. And in a few minutes, she can be converted to provide shaded outdoor dining and sun-lounger. Oh, and there’s a 25 hp tender and dive compressor for those that want to get under the water.

She is equipped with a complete racing sail wardrobe and is certified for category 1 ocean races. 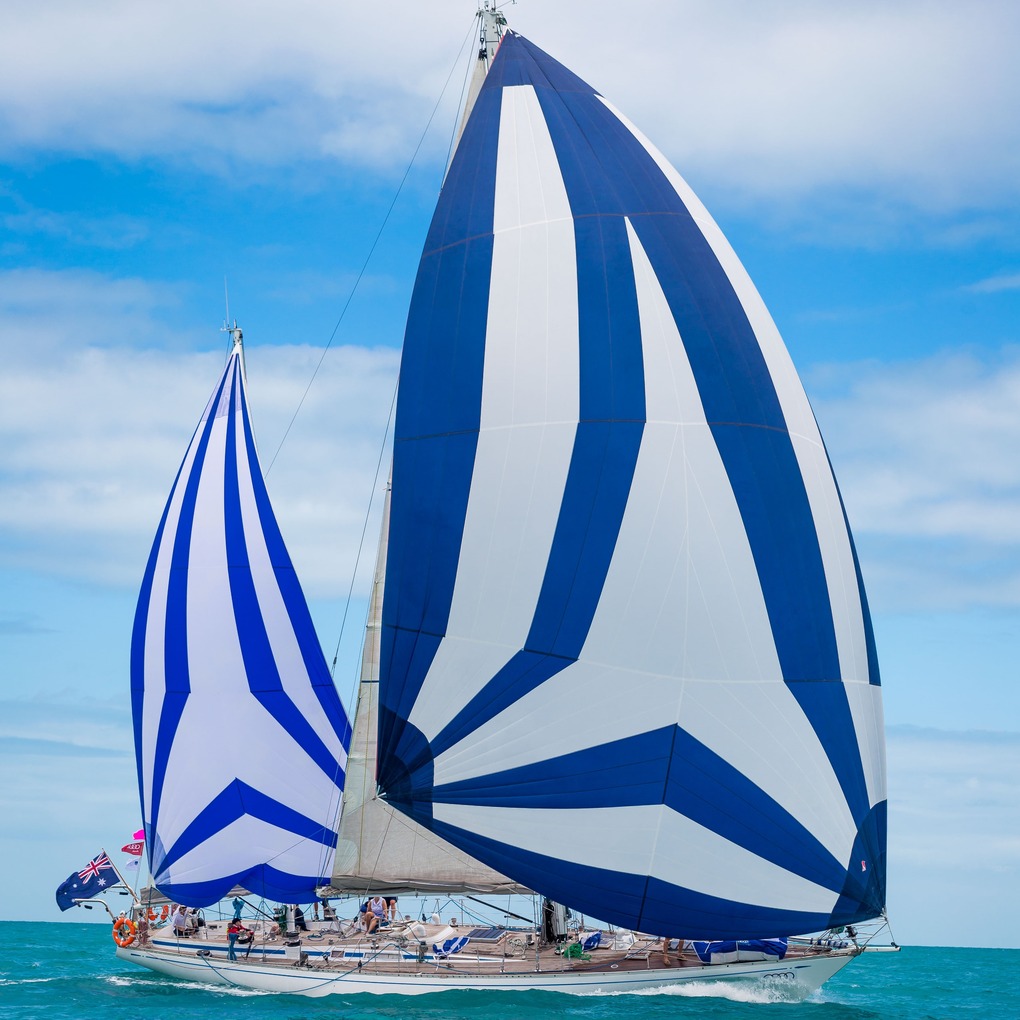 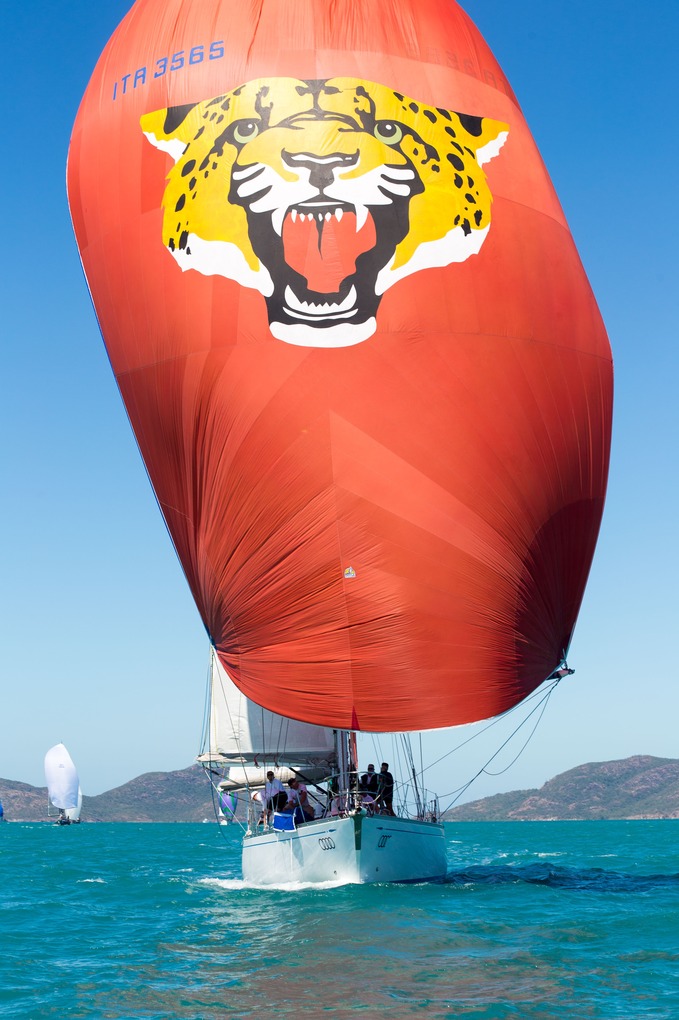 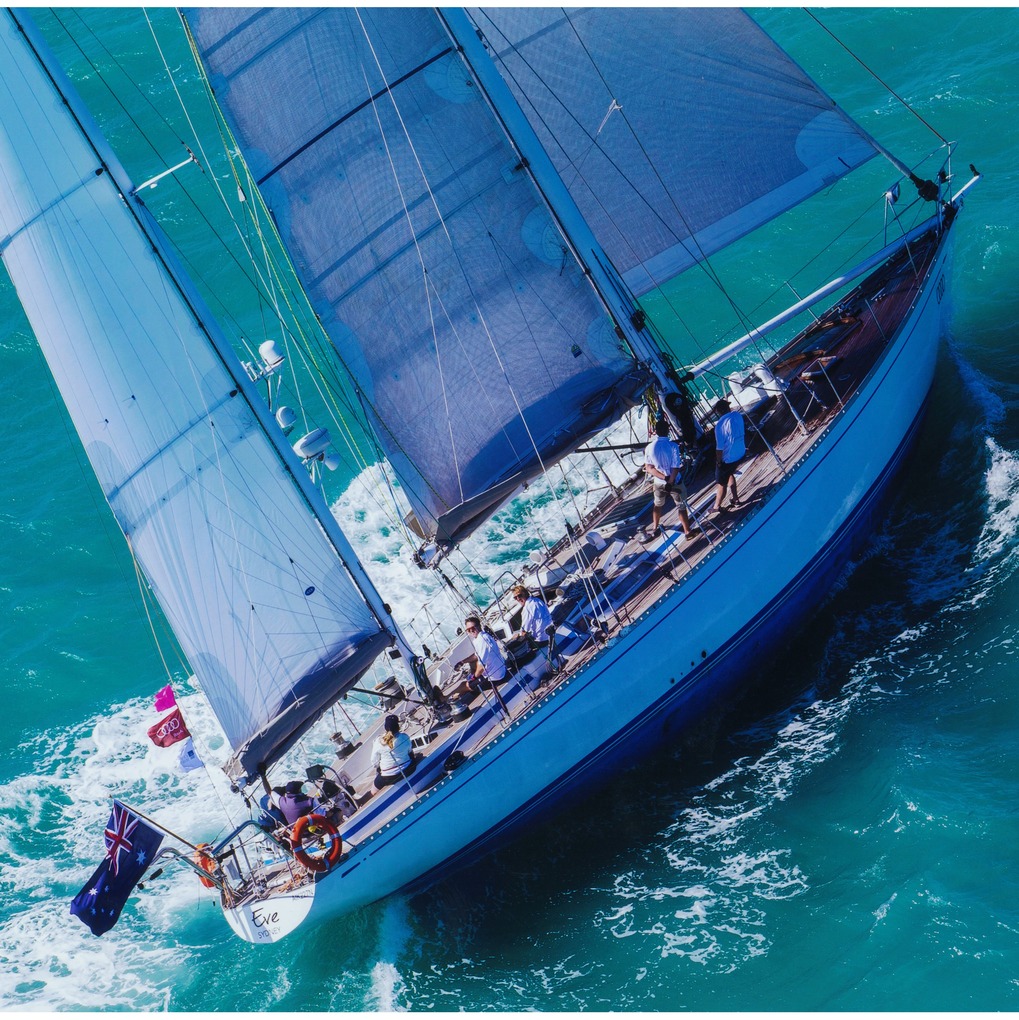 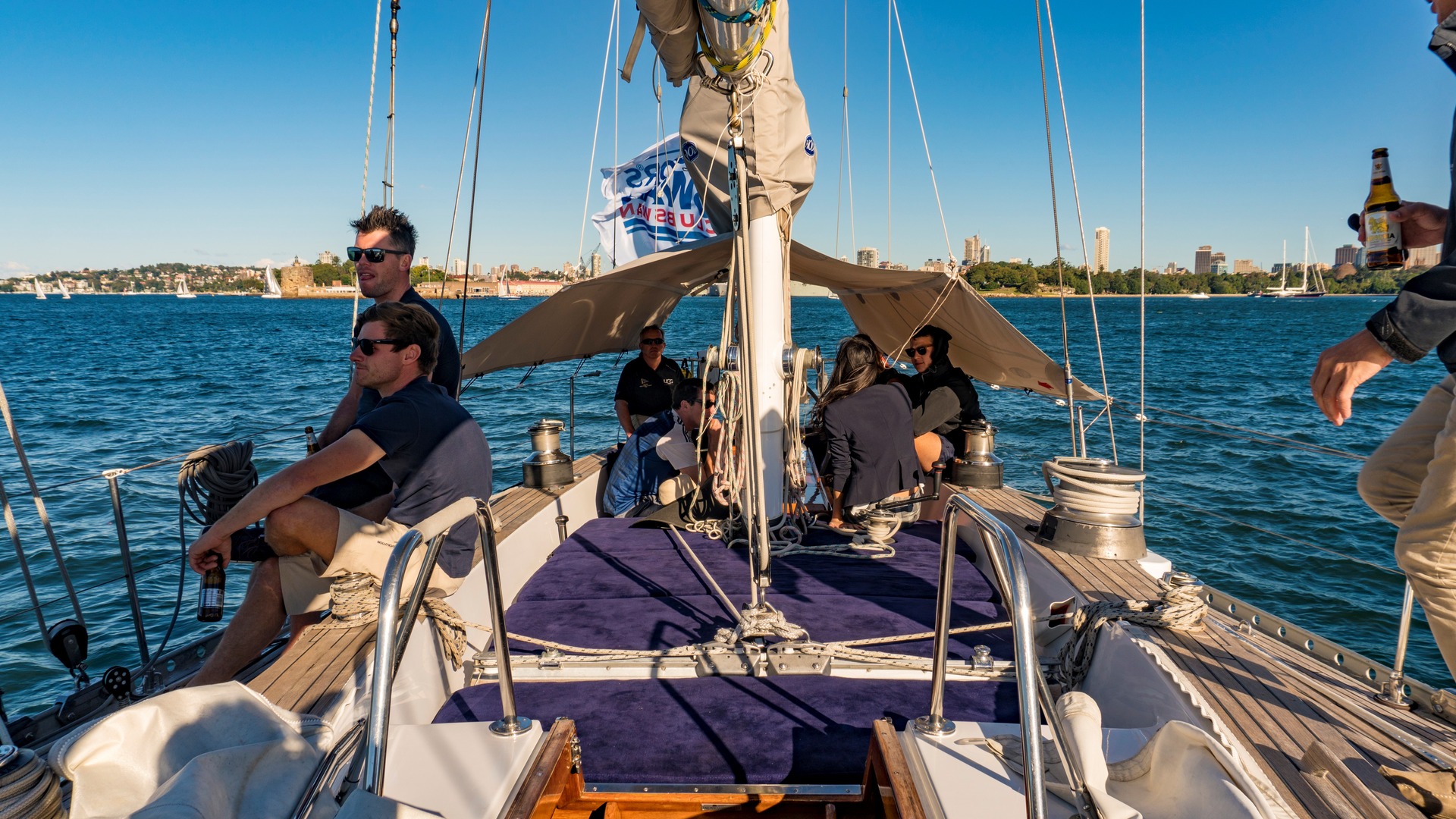 Subscribe
For a monthly update on our adventure and opportunities to join us...
Coronavirus (COVID-19)

Due to COVID-19 and the restrictions now in place, many countries shut down their travel and many sailing events had been cancelled because of Covid. However it looks like we are on the rise and restrictions around the world will be easing soon.  All private charters and regattas in QLD and NSW are operating as usual (if covid decides otherwise) . Swanning Around is a Covid Safe business and we follow the pandemic updates closely . If you are unsure of the current situation feel free to get in touch and we can get you up to date with Eve’s current/future plans - Covid pending.  Click here for our Covid-19 policy.

We hope to see you in the near future for a sailing adventure.